The groundhog family had been living under the porch of the old farmhouse for generations. It was a pretty nice location: the humans didn’t spend too much time outside, and they never bothered the groundhogs. There was plenty of clover to eat and even an ornamental peach tree to climb.

Life had been particularly good in the past couple of years. Something had happened to the male human, and the female human stopped working in the yard almost entirely. The garden in front of the porch got overgrown, and it was hard to even see under the porch. The groundhogs were thrilled. Nothing bothered them, and they came and went as they pleased. 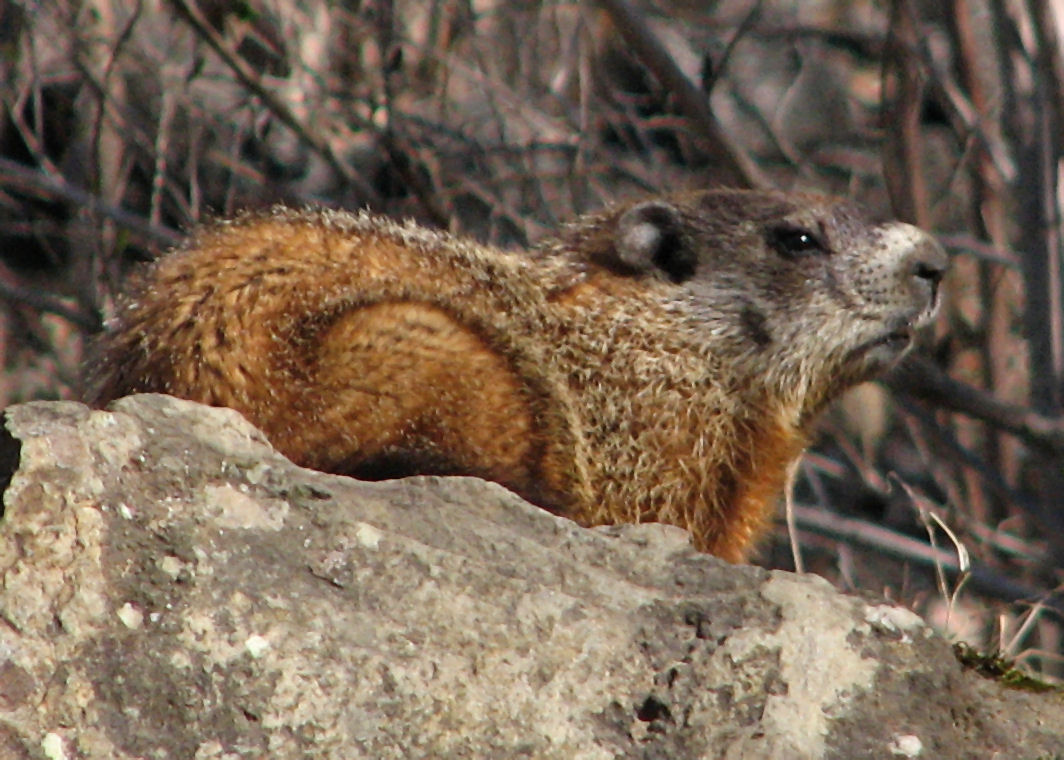 But this past spring something changed.

Harold: Hey Madge, you notice that the human seems more active than usual?

Madge: Yeah. She’s been over at the side of the house digging around. She’s talking about putting in a rock garden.

Harold: That would be nice. It would give us someplace to sun.

Madge: That’s true. We wouldn’t have to walk around to the back of the house anymore.

Harold: I hope she doesn’t dig up all the clover.

Madge: I wouldn’t worry about it. It hasn’t happened in the 20 years our family’s lived here.

Indeed, soon enough the human stopped digging up the side of the house. She came back one day with a bunch of plants that she put on the porch.

Madge: Did you see all that gorgeous greenery. It looks pretty yummy.

Harold: It’s awfully close to the house. I’m not going up there to explore.

Madge: I think she’s going to plant some of it in our yard.

Harold: Oooh. That will be nice. The more green, the better.

However, the human didn’t put the new plants in the yard. She moved them into larger pots and left them on the porch. One morning, the groundhogs heard digging.

Harold: Look, Madge. She’s clearing the part of the yard by the other front porch. Maybe that’s where she’s going to grow our new plants.

Madge: That would be convenient. I wonder if we should figure out a way to tell her where to put the stuff we like best.

The groundhogs discovered that most of the plants were too high to reach. There were a couple of bushes and some catnip. They also found tomatoes and peppers in pots.

Harold: This is very disappointing. I hope the good stuff is in the pots up top.

Madge: Let’s ask the rabbits to check it out for us. They can jump up there and see.

The next night, Pierre jumped up on the railing and had a look around. All he could see were herbs. Except, there was one particularly appetizing smell.

Pierre: Bad news, guys. There’s nothing really good up there. Oregano, sage, rosemary. Nothing that’s really going to appeal to anyone.

Madge: I hope she finishes putting it in soon. At least we won’t have to worry about having a human out all the time.

The human continued cleaning out the yard. The groundhogs weren’t really paying much attention. One Saturday, they woke up to loud noises a few feet from their nest. They looked out in horror.

Madge: Do something, Harold! She’s digging up right next to our porch! We’re going to lose all our privacy.

Harold: What do you want me to do about it?

Madge: I don’t know. We have to stop this. 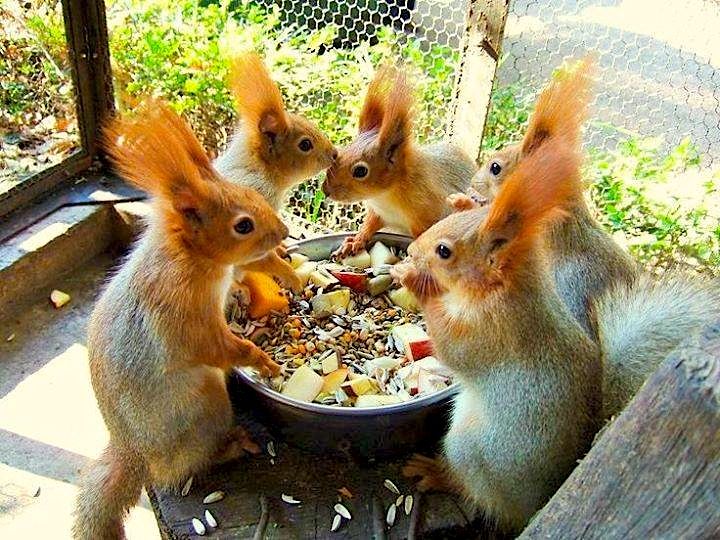 Later that day, they heard the humans discussing the work. They were very excited about how much “nicer” it looked and how much better it would be once all of the weeds were gone. The groundhogs decided it was time for a neighborhood meeting.

Harold: We wanted to get everyone together to discuss what’s going on in the neighborhood.

Sara Squirrel: You mean the humans’ “Beautification” project? It’s awful. They’re picking up all the sticks, digging out all the weeds, and cleaning up the sidewalks.

Roger Raccoon: Before we know it, the whole place is going to look like it belongs on the front of one of those sales brochures. Like it was when the humans first moved in.

Pierre: We can’t let that happen. What if this human decides to sell it? No one is ever going to be as easy to manipulate as she is. 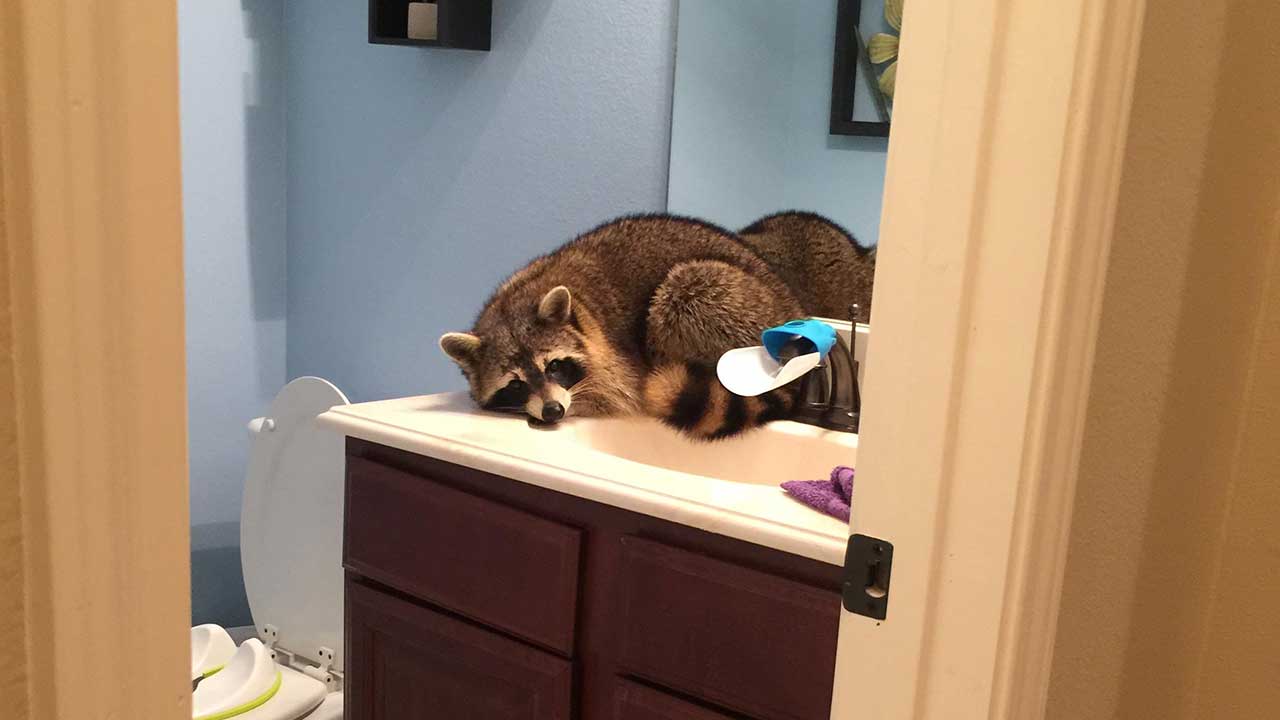 Roger: That’s true. She lets us pretty much run the place.

Harold: Maybe. But she’s destroying my peace of mind right now. She’s ruining the entrance to our home.

Priscilla Rabbit: She’s bringing in nasty plants too. I thought she had planted some fennel. Super yummy. But when I dug up the bulbs, it was only the plant, not the edible kind. Talk about rude.

Madge: A couple of cats have started hanging around too. You know the neighborhood won’t be safe anymore if they stick around.

Roger: We have to do something before we get beautified out of our happy homes.

Next Week: The animals’ plan and how it works out.

20 thoughts on “There Goes the Neighborhood: The Groundhogs’ Bad Season”