Kommando: Did we tell them that our human sister is getting married in October?

Snoops: I think so.

Kommando: Did we tell them that we’re going to help?

Kommando: Let’s tell them what we’re gonna do. 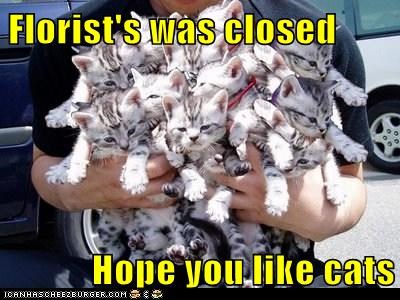 Snoops: What are we going to do? You mean the present?

Kommando: Of course not. She might read this and it would ruin the surprise.

Kommando: No. We’re going to help with the food at her party before the wedding.

Snoops: You mean that thing they call a shower, even though there’s no water?

Kommando: Yeah. Humans are weird, but I wasn’t going to help if there was real water.

Snoops: Did you find any good recipes?

Kommando: I thought so. There were all kinds of things called mousses. I thought it was a typo for mouses. It’s not. People make mousses out of all kinds of stuff. Most of it’s pretty disgusting.

Kommando: There is not a single recipe out there with mouse as the main ingredient. And very little tuna. There is some salmon.

Snoops: Well, maybe we could try the tuna ones.

Kommando: I don’t think so. They mix it with stuff like mustard and lemon juice. One of them even said to use chickpeas.

Snoops: I don’t know what a chickpea is, but it must be some kind of vegetable. Peas are those little rounds things we can chase around.

Kommando: That’s the other thing. Humans put vegetables into almost all of their party foods.

Snoops: I guess that’s to make them feel better about the cake.

Kommando: They even ruin cheese with nuts and beer and wine and stuff.

Snoops: EWWWW. Maybe this is going to be harder than we thought.

Kommando: I had an idea. You know how much humans like pizza?

Kommando: I know that. But we get cheese pizza and put the mice on ourselves.

Snoops: That might work. And cold catnip tea. It will be purr-fect.

Pictures courtesy of Google Images (except us of course – tell Mom we want some pictures that don’t make us look like we sleep all the time, but not when we’re eating or bathing or using the litter box – maybe while we’re on bird patrol or mouse patrol)