They hung around the harbor, waiting for the next truck. In the meantime, mehitabel talked to some of the local cats to seen what they knew.

Every cat told the same story. Early the morning of the delivery, the truck would arrive with the kittens. The men would disappear for a few hours, leaving the kittens alone in the locked truck. When the men returned they would put up a nice display, fluff up the kittens, place each of them in a nice cage with water and toys, and wait for the buyers. When the people arrived, the men would match them with the kittens and the kittens went home with their new human parents.

The cats had never seen the kittens or the truck anywhere near the water. In fact, they came from the opposite direction. So the kitten was right!

Finally a truck arrived with kittens. They set up in the same place as before. mehitabel could hear the kittens crying while the men went off to eat. He’d never had a mate or kittens but thought that he should do something.

mehitabel jumped up into the truck. It was filthy. Even archy was appalled. The kittens were together in one cage. They looked terrified and wanted their mothers. When they saw mehitabel, one of them asked if he was going to eat them. He was somewhat offended. 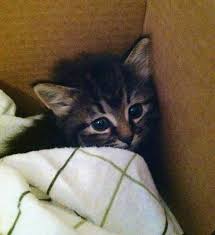 mehitabel assured them that they were perfectly safe with him; he was there to make sure they were OK. They were hungry and tired, but otherwise fine. They wanted to know what was going to happen to them. mehitabel told them that they would each go to their forever home where humans would love them and treat them well. He didn’t tell them that because they were so expensive, they would be living in some of the nicest places in the city.

mehitabel heard the men and hid in a dark corner. He watched as they brushed the kittens and put each one into a spacious cage with food and water. The kittens ate ravenously. The name of the human parent was attached to the appropriate cage.

We watched as the humans came for their kittens. They all looked like they would make good parents. They cuddled the kittens and told them about their new homes. The kittens snuggled and purred. Then they were put in carriers and on their way home.

But where had they come from? Since the humans had lied about where the kittens came from, what else had they lied about? We decided to take a trip with the truck drivers. We returned to the dark corner until the truck started to move.

It wasn’t a very long ride. And it definitely wasn’t anywhere near the water. In less than an hour, we smelled the unmistakable aroma of cows. Lots of cows. Then we were on a very bumpy road. Finally the truck stopped and the men got out. We could hear several voices.

Man 2: Same as always. They just loved their “exotic” kitty.

Man 3: How do you think they’d feel if they knew those cats came from here and aren’t even purebred?

Man 1: They better not ever find out. Do you know how much we’re making off of those little furballs?

Man 3: Sure beats working for a living.

(They all laughed as they walked away.)

We looked at each other. We definitely had to get to the bottom of this. These men were taking advantage of cats!

Unfortunately we couldn’t do anything until someone came back so we could get out. Finally someone came for the cages. We heard him before he got to the truck and were waiting. As soon as he opened the back end, mehitabel jumped out with archy holding tight. Luckily it was dark, and the man was busy with his work.

We took a walk around the place and couldn’t believe what we saw.