When I was little, my dad worked for a large company that had an annual picnic at a nearby lake. It was a big deal – games, food, beer tent (Dad’s favorite). And a calliope.

I looked up the definition of calliope. It is a musical instrument that produces sound by sending steam or compressed air through large whistles. It also said that calliopes are very loud; some small ones are audible for miles. There is no way to vary tone or loudness. The only variables are the timing and duration of the notes. Don’t see any popularity issues there. Sounds like a lot of the kids who come through the store.

Calliopes must be tuned often to create quality sound (probably an oxymoron). The pitch is affected by the temperature of the steam, so tuning is almost worthless anyway. They decided to just tell people that those off-pitch notes were just a part of the instrument’s charms. It’s a good thing that rationalization has never caught on for singing.

Interesting note: The calliope was patented by Joshua Stoddard on October 9, 1855. (Start planning your anniversary celebrations now!) He planned for it to replace the bells at church. I don’t know what type of church Mr. Stoddard attended, but I can’t imagine waking up to the sound of a calliope playing two miles away. Or listening to it chime every hour. I’m thinking the people would have sent Joshua from his home in Worcester, MA, to somewhere on the open prairie.

Apparently a calliope can either be played by hand or mechanically. I read that calliopes began using music rolls starting in the 1900’s. The ones I saw always had human players. I wonder if the musicians were just pretending to play. How disillusioning.

The real reason for the demise of the calliope seems to have been the replacement of steam power by things that didn’t get into our lungs and try to kill us. No steam, nothing to drive the music. I think it was a conspiracy by the same people who don’t want Harleys driving through their subdivisions at 3a.

The only calliope-maker in the world right now lives in Peru, Indiana. So it appears that the instrument will not be making a comeback any time soon. It’s probably just as well. Who needs another type of loud discordant music floating around? 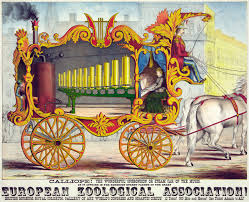