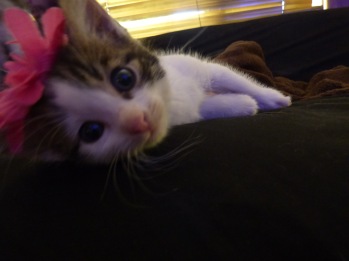 This month we welcome Purrseidon to Cat Forum. She is a very talented kitty and writes her own blog. It’s called Purrseidon, so it’s really easy to remember. She highly recommends her mom’s blog too.

(Remember: Our comments are in italics. Snoops and Kommando)

How did you find out that you like water so much?

I’ve loved playing in puddles and getting baths as long as I can remember, but I guess my staff first noticed when they caught me playing in Saphera’s water bowl.

(For such a sweet cat, that is sooo weird.) 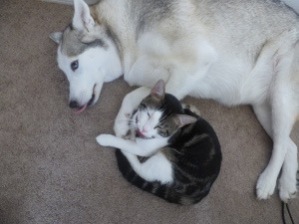 Tell us what it’s like to live with a dog. Do you and Mr. M ever gang up on her?

Actually, Saphera is sort of my surrogate mom. I was living feral, when my sisfur, Lucy Fur, died and then the humans who were to become my staff saw that a neighbor dog had me by the scruff of the neck and was shaking me. They managed to save me and when they brought me in, Saphera sort of adopted me – she is very motherly. Truth be told, it would be more likely for us to gang up on M, but we don’t do that and if we ever did, I’m not so sure we’d win – M has some amazingly effective moves. 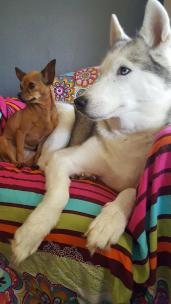 If you can’t get to the water, what’s your favorite thing to do?

I like to go hiking and climb my oak tree (but only when those horrid squirrels aren’t around). I also like to play tag with Saphera’s best friend, Livie Lou, who is a chihuahua and just a bit smaller than me, but she is very, very speedy. That all said, water is usually pretty easy to get to, but getting the staff to take me to the beach is a lot harder – they have work and school schedules to juggle and then the weather (including rip currents) is a big factor. 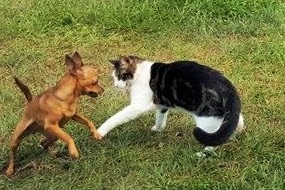 (Kommando: Maybe she was a dog in her first life, then discovered cats are cooler so she changed for the other eight. Snoops: Then why are there still so many dogs around?)

Do you, Mr M and Saphera each have a favorite human?

Mr. M’s favorite person is mom and my purrsonal human is Master Munchkin. Like I told you, Saphera is very motherly, so she loves babies of all sorts… She does not like most adults (though she makes exception for family) and – I hate to admit this failing, but she doesn’t like adult males with dark skin, so Mr. M avoids her, even though he shares her love of babies – sticky fingers and all. (Eww)

Saphera was found running next to the interstate when she was about 6 months old. Her tail had been broken and she was in rough shape. Obviously, I was not around then (I just turned 2 and she is 8), The staff think she was abused and that she has some form of puppy PTSD. 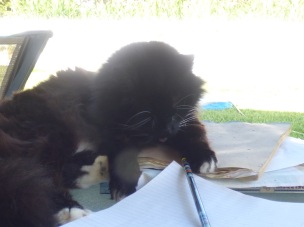 What’s it like to live with a writer? Is she away from home a lot?

Mom and Mr. M collaborate on writing family-friendly fantasy and they are basically home-bodies. They finished The Chatterre Trilogy last year and are currently working on a new episode for Xander de Hunter’s Sea Purrtector series … I help with this, too.

During his youth, Xander de Hunter gained fame in Catamundo’s kickboxing tournaments. When, he and his family moved aboard sailing vessel, Whispurring Winds, Xander became Catamondo’s first Sea Purrtector. Latitudes & Cattitudes is a short (free) prequel to the series. It takes place when Xander is still purrticipating in the kickboxing tournaments. M and mom worked on that one and The Red Claw without me, but I started learning to be a muse during Purr-a-noia and by the time we wrote Me-YEOW!, M started muttering about me and my character, Mischief, trying to replace Xander. That is not exactly true, but Mischief does have my water skills, so I think she would make a wonderful Sea Purrtector. 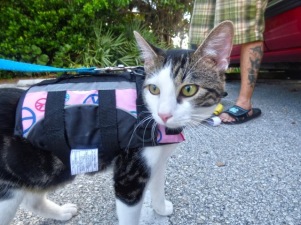 Do you get to eat a lot of fresh fish since you live so close to the ocean?

Not as much as I’d like to eat – I love, love, love sea food. Saphera does, too, but M purrfers chicken.

(Dad would love her. Someone to appreciate the fish he catches. Wish he’d fish for deli ham some time.) 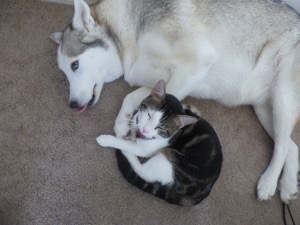 Tell us one thing about each of your family members that you really like.

Mr. M tends to be quiet and keep to himself, but he is very smart and I learn a lot from him. He is also a big help with the blog and I can depend on him to share information about science and/or space at least one day per week.

Saphera is an excellent watchdog, except that she mainly watches so she knows when to hide, thus M is a better purrtector, but Saphera is a great surrogate mom.

Pop is super smart and knows a lot about music, gardening and loads of interesting stuff.

Mom is really good about keeping on her writing schedule and still serving tasty meals on time.

Ms. Munchkin is also very smart and she’s learning to be a good cook.

Master Munchkin is my favorite person and we spend as much time together as possible. He reads me a bedtime story every day. 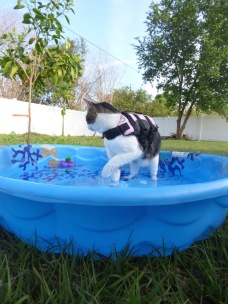 What’s it like writing a blog every few days?

It’s pretty easy compared to writing a novel, but then, I get a lot of help from M and mom.

I would like to thank you for choosing me and taking the time to ask these questions…. Purrhaps, if you are ever near Florida’s Space Coast, you’d like to come to a pool party.

(We need to look up Florida. I don’t think we can walk there. Maybe a business trip so Cheeseland pays for it.)