Snoops: Greetings, fellow felines. Welcome to Cat Forum where we catch the news that the others drop.

Kommando: Do you like that? The marketing folks thought we needed a slogan and that’s what they came up with. It makes me think of a dog sitting under the dinner table.

Kommando: Seriously, Snoops. Do you want a slogan that makes the audience think of drooly dogs?

Snoops: We can deal with that later. We have a very special guest today. She is Captain Ginger McPhurrson from the Cat Safety Patrol. She is going to be giving us some tips about Halloween Safety. Welcome Captain and thank you for being here.

Captain McPhurrson: Thank you for having me. I would like to commend you for planning ahead. So many cats think that all you need to do for Halloween is get some kibble treats and send the kittens out around the neighborhood.

Kommando: See? The other people didn’t even get a chance to drop this. It’s a dumb slogan.

Captain McPhurrson (laughing): You may have a point there, Kommando. There are three things I would like to talk about: trick or treating, catnip, and humans.

First is trick or treating. If you are planning to allow your kittens to go out this Halloween, you need to go with them. The days are gone when the fathers could take out the kids and hang out drinking spiked cream while the kittens went door to door. 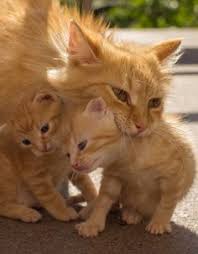 Last year, we caught a band of cats who were ransoming kittens for tuna and other goodies. A whole neighborhood bought tuna steaks to get their kittens back.

Kommando: Those cats should be sent to a dog shelter!

Captain McPhurrson: We agree. The important thing is that no kitten should be out by themselves on Halloween. This also applies to the 1-year-olds who think they are all grown up. No parent means no trick or treating.

Snoops: That is definitely good advice. What else do you have for us?

Captain McPhurrson: I want to emphasize that Halloween is meant to be fun, but catnip needs to be used responsibly. Every year the hospitals are full of hallucinating cats. 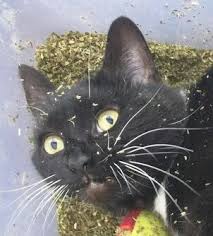 Snoops: Can you tell us how much is safe to use?

Captain McPhurrson: Well, that’s part of the problem. Some cats don’t seem to be affected by it at all, while others seem to be “nipped” after a few leaves. We recommend that every party have at least one or two non-nippers. That way they can watch for friends who seem to be overly frenzied.

And under no circumstances whatsoever should catnip be given to a kitten under one year old.

Snoops: You said you also wanted to talk about humans.

Captain McPhurrson: Our best advice is to avoid them as much as possible during the Halloween season. Those of you who live in cat communities should stay in your neighborhoods. Humans are all wrapped up in their own kittens and don’t watch where they’re going. Besides, human kittens are scary on Halloween. They usually dress up so they don’t look like humans.

Kommando: The really funny ones are the ones that try to look like cats.

Captain McPhurrson: They are scary looking.

You cats who keep human servants have a different issue. Some of those humans will try to get you to dress up in little costumes or use you as a prop for their party. You shouldn’t sacrifice your dignity for the humans, no matter what treats they offer. Before you know it, you will be on Instagram or Facebook and all your friends will know. 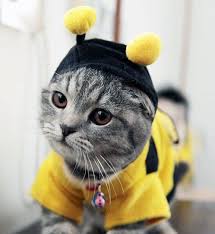 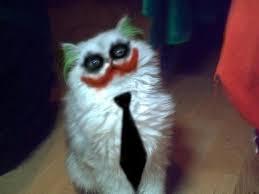 Snoops: That is a lot of really good advice, Captain. Thank you again for being on our show.

Captain McPhurrson: I enjoyed being here. I hope you both have a happy, safe Halloween.

(All other pictures courtesy of Google Images)