The resident male human (Cat’s husband) loves to watch American football. He watches it all fall, but at the end of the year there seems to be a lot of “bowls”. Watching with him, we noticed something strange. The winner of the Rose Bowl didn’t get a bowl of roses (or even a bowl), the winner of the Orange Bowl didn’t get oranges, and some of the bowl were for gifts that didn’t even make sense. (Who’d want a weed-eater as a prize?)

It seems that the biggest game of all is this weekend. They call it the Super Bowl. What’s so super about it? Apparently it shows who has the best football team in the country. But they still don’t win a bowl. Instead, they get really big rings. You can’t eat out of a ring.

So we decided that we needed to sponsor our own bowl, The Supper Bowl. And guess what the winners get? Silver bowls with their names engraved on them and a year’s supply of their favorite food (funded by an anonymous donor.)

We had to make a few adjustments to the game. Since few animals are bipedal, runners can carry the ball in either their hands or their mouths. Unless the game is between two bipedal teams, passing is not allowed. Finally, field goals are not allowed because of the difference in animal heights. 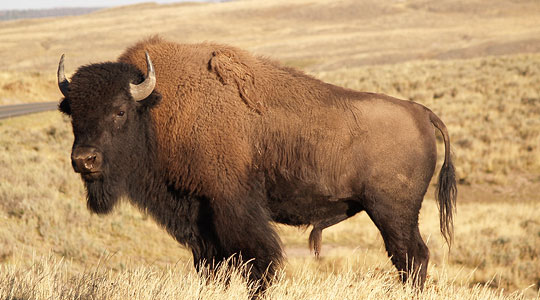 After an 8-game playoff, the contenders in the inaugural Supper Bowl are the Lions and the Bison. It’s a classic match-up of speed and brawn. We’ll see if the Lions’ stealth is any match for the brute strength of the Bison.

Now, on to the game with our commentators, Biff and Zoomer:

Zoomer: Well, here we go. The Lions are kicking off to the Bison. That was some kick. The Bison ball carrier starts slowly, but now he picks up speed. Biff: Oh my goodness. That Lion defense is pretty impressive. Two go for the legs and one jumps up in front of him. There’s no gain.

(Two more attempts and the Bisons turn the ball over to the Lions.)

Biff: Now we’ll see how good that Bison defense really is. The Lion runner takes off but has no where to go. No gain.  Running through the Bison line is not going to work for the Lions. Zoomer: There he goes again. He sees a little daylight around the end and runs for it. The Bison line is slow to react. Touchdown! The Lions lead 6-0.

Biff: OK, now the Bison need to make sure that they come back strong.

Zoomer: Oh no! two of the Bison players have collided. This is not good. They need to be helped off the field.

Biff: The offense is already down players from previous injuries. They’re going to have to put in rookies. (As expected, the series doesn’t go well for the Bison and they don’t score. Things go back and forth for most of the game. The defenses manage to keep either team from scoring until late in the game.)

Biff: Well, this is it for the Bison. If they don’t score here, they’re out of time.

Zoomer: Right you are. Here we go. The Bison form a group around their runner. They move as one. The Lions have no choice but to move out of their way. It looks like we’re headed to overtime.

(The teams take a break to discuss their strategy. Whoever scores first wins the game.)

Zoomer: Since the Bison had the ball first in the game, the Lions will get it first in overtime.

Biff: Rumor has it that the Lions have been practicing a trick play. If it’s true, now’s the time to use it.

Zoomer: We’re back on the field. The Lions have the ball. The carrier goes to the left instead of straight ahead and runs into his own player.

Biff: No! He didn’t run into him. He gave him the ball. The Bison look confused. The new runner passes the ball to a third Lion. He takes advantage of the confusion in the Bison defensive line. He leaps over two Bison who are wandering around and heads for the end zone.

Zoomer: And the Lions win the Supper Bowl!

Biff: Let’s go down to the field to talk to the victors.

(Fortunately for fans everywhere, the teams have disappeared into their respective locker rooms and are not available for interviews. The Supper Bowl will be presented the next day at a banquet.)

Alert readers should have guessed the outcome. We are based in Michigan, home of the Detroit Lions.