You might remember us introducing you to April, the pregnant giraffe, back in March. We asked several animals for advice on motherhood and the media. Since then, April has had her baby, and is thriving as a mother. Below is what she had to say when we caught up with her.

Tell us about your son.

His name is Tajiri, which means means hope and confidence in Swahili. My favorite keepers, Allysa and Corey, picked it out. I guess it fits him. He is full of energy and loves to entertain the humans who come to see us. 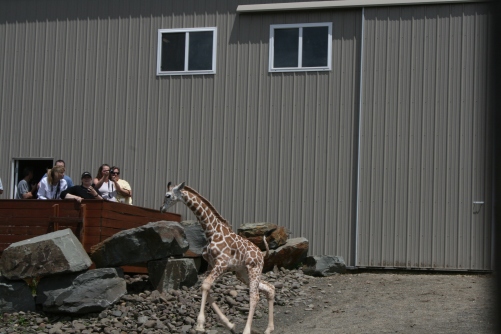 Has some of the craziness stopped now that you have given birth?

Oh my goodness, no it has been a zoo around here. Oh I made a joke…any way, the humans who watched my butt for 2 months are traveling here to the park to see us. It has been a good thing for my Jordan. He loves us animals so much. This has allowed him to do things he never dreamed of being able to do.

Are you still streaming video and all?

Where can people find it? Yes we are live every day from 4 pm to 8 pm. Our public missed us so much we put the live feed back up. Jordan also goes live to teach about the other animals he has here. The link can be found on the Animal Adventure Park website and Facebook page.

Your baby looked so big when he was born (compared to kittens), how big was he? 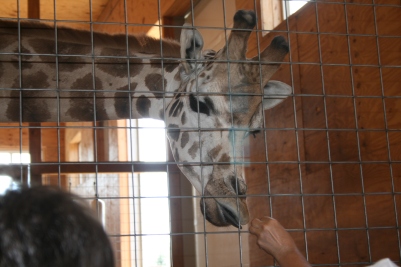 What do baby giraffes eat? Does he get treats from the humans?

Giraffe calves nurse from their moms, but they also sample the hay and feed that the adults eat. Tajiri is starting to take carrots from the humans who come to visit. They make such a fuss over him.

How does he get along with the vet and other humans he sees regularly?

He is learning the right way to behave around humans. He does sometimes act out though, and Allysa has had to scoot out of the way. She is so patient and loves us. She works with Tajiri daily, teaching him to move where she wants him to go and to tolerate human touch.

What types of things do giraffe moms teach their children?

Since we are in the care of humans our job is made easy. We do most things by instinct though. Humans say we have a VERY short attention span so we are always learning and exploring our habitat. Food is our biggest motivation….we love romaine lettuce and carrots. 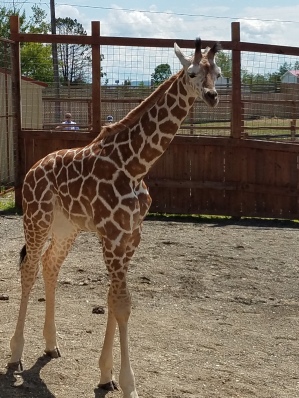 Do you like showing him off to the humans?

I don’t mind sharing the limelight with him. I trust my humans so I let them in with us right away. He is famous now so Oliver, his Daddy, and I accept that he will get as much attention as we do. He is just so darned cute.

I wouldn’t mind having more babies. I’m only 14 and in the care of my humans I could live til my mid 20s or more. Jordan said I had an easy time and am a good mom, so maybe there will be more….stay tuned…it will probably be Giraffe watch 2020…

I guess I don’t understand all the excitement I caused, but I am very glad it has done so much for the Park. All of the attention it has brought to the conservation of Giraffes has been great too.

14 thoughts on “April the Giraffe: Motherhood Suits Her”