Kommando: Hi everyone! We’ve been so busy interviewing other cats that we forgot our most interesting subjects.

Snoops: Things have been a little interesting recently. 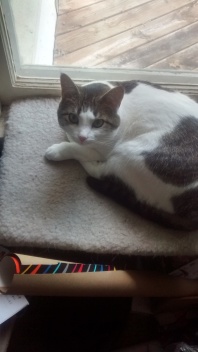 Snoops: You may remember that we had four humans – two male and two female. Now we’re down to three.

Kommando: The younger female moved out. She brought home a strange male human one time. It was awful. He smelled worse that Horatio Hedgehog. 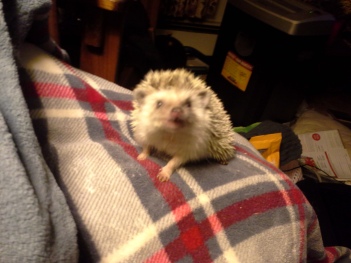 Snoops: She didn’t mean it. You know we love you.

(He huffs and goes back to sleep.)

Kommando: Anyway her room is on the second floor and has views from two directions. One is even a new direction!

Snoops: It’s true. But it’s probably the most boring. There aren’t any trees that way.

Kommando: That’s true. But still, she was hiding it from us.

Snoops: True enough. It was so messy that it was hard to get over there.

Kommando: It hurt my delicate little paws to walk on it.

Snoops: Whatever you say, Kommando. Let’s move on to the pawsome TV show we found on human TV.

Kommando: That’s right; I almost forgot. It’s called “My Cat from Hell.”  Every time we see it, there are cats just being cats. You know, racing around and getting into stuff.

Snoops: Well, some of the cats are a little obnoxious. There seem to be awful lot of them who bite their humans. We don’t approve of that at all.

Snoops: She right. The pawsome part is that the human who runs the show, Jackson Galaxy, always blames everything on the humans! All the “bad” stuff that the cats do is because of something the humans do. Even scratching the drapes and pooping outside the litter box.

Kommando: Yep. They get homework and everything. And the humans work really hard to get their cats back to our usually sweet selves.

Snoops: He always says that there are no bad cats. We already knew that, but it’s really cool to hear a human admit it.

Kommando: Every week, the humans have done what they need to, and the cats have become snuggly like the rest of us.

Snoops: Life has been good.

Kommando: Well except recently. We got abandoned again.

Kommando: Mom has been home with us 24/7 for the last few weeks. She had the other tunnel opened, on her left wrist. That’s two, so I think she’s done.

Snoops: It’s too bad. For the first couple of weeks, she wasn’t supposed to lift much of anything. And after that she had a weight restriction.

Kommando: It was great. Naps and snuggles and cuddles…

Snoops: It’s a good thing that she went back though. We used our last can of food the day before she went back. And she gets our food where she works.

Kommando: Oh, right. That would have been bad.

Snoops: At least she works nights. So we have someone here to wait on us all the time.

Kommando: And Dad had that flu thing a couple of weeks ago. He wasn’t much fun, but he was good to sleep on.

Snoops: And they get different days off, so they’re both here together.

Kommando: All right. I guess life is pretty good.

Snoops: And it would be perfect if we could get rid of all the noisy machines… 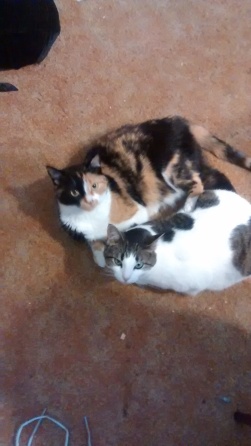 15 thoughts on “Snoops and Kommando: On the Prowl”

get up, stand up for your rights!