Today we are here with Chloe and Charlie from Insights from the Edge  (We are not sure what it is the edge of; it must be a human thing.) It is written by their mom Amy. She does not write about cats, but it’s pretty interesting anyway. Apparently she writes for a living, so that’s probably why it’s pretty good. It would be better if she wrote about cats.

Tell us a little bit about each of you.
Chloe: My lady told me other humans found me under a dumpster at three weeks old. I was the only girl. I had many brothers. One was blind. He was a good guy. The rest were annoying. I met my lady when I was eight weeks old. She ignored me, so I liked her. All the other humans who came were so annoying. They picked me up and tried to poke me. My human wouldn’t look at me. So don’t you know, I had some things to say to her. I climbed up her arm and stuck my nose in her nose and that was it. I told her she was to be my lady. That was that. And oh, yah, Charlie. Well, that first night the lady put me in the bathroom. I said, “Absolutely, no way, lady. You will take me out of here right this instance.” She did. Then I met Charlie and he was so dirty I had to start cleaning him right there.
Charlie: All my brothers and sisters died in a flood. Well, there was one other, my last sister. We were together a few weeks, then my lady came and took me. I heard her tell her man that my sister was adopted by a little girl. On her fifth birthday my sister ran into the street and was hit by a car. I’m happy with my lady. But she left me alone a lot in the beginning and when she got back I let her know how unhappy I was. She brought home a few friends for me. They weren’t any fun. One hid under the cold thing where food comes from. She took them away. All I wanted to do was play. Why does everyone get so mad at me?
When my lady brought Chloe I liked her a lot. She cleans me and sleeps with me and when she thinks I’m not looking she puts her legs around me in the winter.

How many humans do you have? Do you live with any other creatures?
Chloe: I have two humans, a lady and man, and one cat, an orange Charlie. After he goes, I’ve called a moratorium on pets. Charlie is just too much. He whines all the time, sleeps on my human when I want to, and doesn’t even have the decency to cover his number one or two. Also, he almost never cleans himself, which means I have to. Exhausting.
Charlie: I have a lady and there’s a guy that lives here, and another cat. She’s not very nice all the time. I like it when it’s just my lady and me. She loves only me. She feeds me treats and everything. I like that because it is just like it was when I was a little boy, before everyone else.

Do you guys always get along or do you get hissy once in a while?
Chloe: (heavy sigh) I guess he’s all right. He’s big and warm. I do enjoy sticking my paws under his belly where it’s especially soft. But that’s all. Sometimes he really makes me mad and we fight and he’s huge and I end up under the piano bench yelling at him to go away.
Charlie: I love her and love to play. Then she gets really mad. I don’t know why. Then mom separates us. I don’t know why. But then she comes upstairs, where I am, and she sits by the door until mom lets me out. So I think she loves me too.

Do you have a favorite place to hang out?
Chloe: The couch
Charlie: Ditto 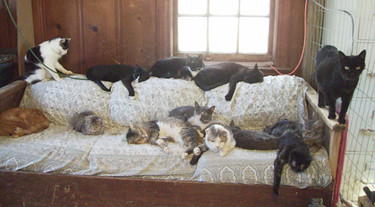 It says that your Mom lives in LA. Is that a good place to be a cat?
Chloe: It’s not. We don’t get to go outside very much. Too many humans and dogs and loud scary monsters roaring and racing by. We have a nice porch outside, but I don’t spend much time there anymore. I did when I was young, but I’m tired now. I do occasionally. I like to smell the smells.
Charlie: I’d like to go outside and explore, but mom says no. We play inside with the red dot. One day I’ll catch it. I  have a little bird that makes a lot of noise, but I’d rather go outside. I get bored.
(We like cat TV. It varies at the different windows.)

Do you get to eat trendy food?

Chloe: Oh, we do. Venison. I’ve made my human spare no expense. And the most expensive treats I could find. You get what you pay for, after all.

What’s your favorite way to spend time with your human?
Chloe: I think I speak for both of us when I say, when she’s at home, on our couch and it’s just us. (except it’s annoying when she’s tapping away on that board of hers. I always let her know it’s time to stop. She should be sleeping, like any sane cat.)

If each of you had one wish, what would it be?
Chloe: To be well. I’ve been sick all my life. Mommy holds me and walks me around and I like that. She makes it better a lot. She tries to know what to do. And I don’t ever want to go to that place where they poke me and stretch me and make me so scared. I don’t ever want to go there again. I want to feel good.
(We agree. Those people try to be nice, but they’re not. Have you tried catnip tea? If it doesn’t make you healthier, at least you’ll be happy.)

Charlie: To be with Mommy, alone.

Don’t forget to check out Insights from the Edge. Even if it’s not about cats.
(We apologize if the formatting is weird. WordPress would not cooperate.)

28 thoughts on “Cat Forum Interview with Chloe and Charlie”