A flock of wild turkeys were strolling around discussing current events.

(The other turkeys look bewildered.)

Turkey 1: That’s the day that every human wants to have turkey for dinner.

Turkey 2: So what? They hunt for us every day.

Turkey 1: I was talking to a guy who was passing through. Apparently we have some kind of relative called a domesticated turkey. Humans raise them on farms just to eat them.

Turkey 1: He said that they have put together a team of freedom fighters called Freedom for All Turkeys (FAT). They are going to try to release as many turkeys as possible.

Turkey 1: He wants us to let them know if we see any of these farms so they can set the turkeys free.

(They all nod and go back home.)

Wilma: Fred, I heard the most horrible thing today.

Fred: What’s that? (He’s scratching the ground looking for something.)

Wilma: The humans have something called farms where they raise turkeys just so they can eat them!

Wilma: No, it’s not. There’s a group called FAT that’s trying to release as many as possible. We have to help.

Fred: What can we do about it?

Wilma: I want you and the boys to go to one of these farms and bring one of those poor turkeys back. At least we can adopt one of them.

George: Dad, why are we out here in the middle of nowhere?

Fred: Your mother wants us to rescue a turkey from a farm.

Tim: How much farther is it? We’ve been walking forever.

Fred: It should be around here somewhere.

(They walk up to a large fenced area.)

Fred: Well, I guess this is it.

Tim: Dad, this is stupid.

George: He’s right. Turkeys don’t fly a lot. But we can fly high enough to get over that fence.

Fred: Well, maybe this isn’t it.

(They hear a lot of rustling and gobbling.)

George: Nope, this is it. 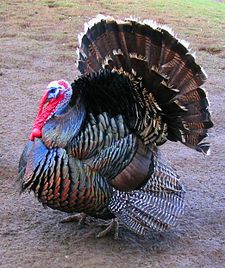 Tim: Is that one of them?

George: It’s huge! Guess that’s why they don’t fly away. That thing can barely walk.

Fred: You, there! Are you a domesticated turkey?

Bertie: Yep. My name is Bertie. Are you guys turkeys? You look like you haven’t had a decent meal in weeks. C’mon in. We have plenty.

Fred: We’re here to rescue you.

George: They’re going to eat you! That’s why they feed you so much.

Bertie: Oh dear! That’s not good. How do I get out?

Tim: Look. A couple of the wires are loose here.

(They pull the rest loose with their beaks and pull the wires back to make a hole.)

Bertie (skeptical): You want me to go through there?

Fred: You have no choice.

(The two boys fly over the fence and push Bertie. Fred holds the wires back as far as possible. After much struggle, Bertie finally pops through.)

They make their way very slowly through the woods, Bertie needing to stop frequently. What had taken a half day going took three days coming back.

So if you’re wandering around the Michigan woods, may just see Bertie hanging around with a bunch of wild turkeys. He looks about the same, although a lot lighter.

WordPress says this is going to publish on Sat. at 6a.  It is now Sat. at 8p and I am manually publishing it.

5 thoughts on “The Adoption of Bertie Turkey”