Once a year all, the reporters for Adventures in Cheeseland get together to describe major projects they are working on for the next year. George and Lenny are responsible for herding the cats (so to speak).

George: Happy New Year everyone! Thanks for taking the time to come to Michigan for this meeting. Cat has a few things that she would like us to mention at the beginning of this meeting.

Lenny: First, we have to commit to having something to publish once a week.

(Under his breath: that’s her fault not ours. General snickers. George takes over.)

George: And our readership seems to be trending a little intellectual. She want us to get a little more mainstream.

Ahab: Not with me. I didn’t sign on to be dumbed down.

(Agreement around the table.)

George: Cat thought that might be your response. So she hired a freelancer for our first attempt. I’d like you to meet Les Sloth. He is going to the convention with Cat’s daughter to get a first-hand view of modeling competitions. (Groans all around.) He’s posing as her bodyguard and PR rep. If it works out, he’ll be a regular contributor. 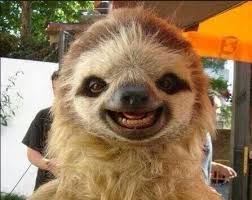 (Les looks around and gently smiles at everyone.)

Ahab: No disrespect Les, but how are you going to guard B? Aren’t sloths rather (searches for correct word)

Les: Yes we are slow. But we are also very cute and that tends to disarm people. While they are looking at me, I have a buzzer to B’s traveling companion who works as B’s wing person. She will be able to talk to people and explain that B is there for work, not socialization.

(The others welcome him as well.)

Ricky T. Tavi: So what are you calling your piece?

Les: Cat and I agreed on “Slothly Ruminations on Human Behavior.”

archy (snickering): That title should draw in the Twitter crowd.

George: If that’s what Cat wants, that’s the title.

archy: It wasn’t a reflection on you, Les. You seem like a nice guy.

(Les smiles at him.)

George: So what else is happening this year?

mehitabel: We’re looking into adulteration at a cheese-puff factory. They may actually be putting cheese into some of their products.

“Ace” Sopp: I am looking into a secret group of sub-Saharan animals who are putting together a peace-keeping group to try to help their northern human neighbors.

Ricky T. Tavi: Unfortunately it appears that there may be some doping on the Bengal Tiger surf team. Since Ahab is the head of the commission for the summer games, we are working together to try to prevent a scandal.

Ahab: Unfortunately, we are finding evidence that the problem may be more wide-spread than we first thought. The human surfing social habits are spreading to the animals.

H. Chris Andersen: I am looking into the beginnings of socialized medicine for animals, particularly in Scandinavia. We are hoping to avoid some of the start-up glitches the humans have experienced. For example, most animals can’t wait several months for tests and surgery.

George: I assume we will be sending someone to the human Olympics this summer?

Ace: Ricky and I drew the short straws because we live in hot climates. I hate dealing with humans. They always act so condescending.

Ricky: Like they’re better than we are. Les, you’re welcome to join us. It’s in your neighborhood and you’re studying humans right now.

George: Great! It looks like we have a good start to the year. Remember to keep us updated on what you’re doing. Don’t forget about the time the Tasmanian devil almost bankrupt us trying to recreate a typhoon.

(They all laugh and adjourn to the dining room.)