Being just a couple of days before Halloween, we thought this would be a good time to get to know a little more about that much-maligned symbol of the dark, the bat.

Our initial plan was to interview a few at their annual Bats are Misunderstood Mammals (BAMM) convention, but some of the members were afraid that outsiders couldn’t be trusted to not give away their location. Apparently our multi-species orientation was not enough reassurance.

So we had to speak with them via Skype (no picture). Here’s what we found out:

Cheeseland: So why all the secrecy? This is your big season.

BAAM: You have got to be kidding. We hate Halloween. All it does is popularize the stereotype about bats. We are not scary animals that swoop down in the night to scare people.

CL: Umm. Actually we have seen some bats come down after us.

BAAM: Sorry, our bad. Some of you guys are lizards and birds, aren’t you?

CL: OK, enough of that. Tell us about your good deeds.

BAAM: Well, we eat lots and lots of insects. You guys don’t have insects on staff, do you?

BAAM: Nectar! We love nectar! We have a huge role in pollination. In fact, the majority of our species eats nectar and fruit.

CL: Really? That’s very interesting. And where do you live?

BAAM (relaxing a little): Oh we live pretty much everywhere, except where it’s really cold. We like relatively enclosed spaces. Since we sleep during the day, we prefer to keep out of the sun.

CL: It seems like a lot of you can live in a small space.

BAAM: Actually, yes. Our bodies are quite small, and we wrap our wings tightly around us.

CL: Does that cause any problems?

BAAM: It causes one of the huge misconceptions about bats. When it gets dark, we want to get outside to  eat. So we all try to rush through the same openings. Sometimes it looks like we’re coming out as a horde to cause trouble.

CL: And some bats probably have fly lower than others which is what looks like swooping.

CL: We’re out of time here. We’d like to thank you for sharing your time with us.

BAAM: Thank you for having us.

(Before the connection breaks, we hear a loud bat voice: How many times do I need to tell you? Never do an interview with one of those liberal animal groups! They always make us look bad.) 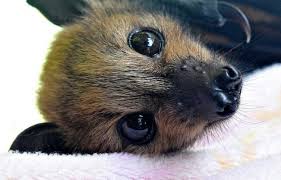 13 thoughts on “Bats in the Belfry (and Elsewhere)”